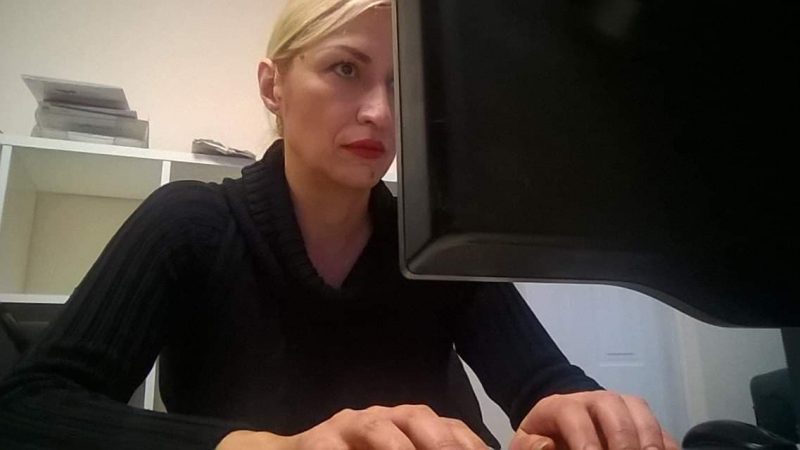 A man from Inđija, a town in the North of Serbia, is under investigation for assault and harassment against Verica Marinčić, a journalist with local news portal Inđija Café. The man, who was identified as Nenad Marić, is a member of the local branch of the pro-Kremlin motorcycle club the Night Wolves, VOICE – a research and analytical center run by the Independent Journalists’ Association of Vojvodina, reported on 31 August.

Following his attempts to intimidate Ms. Marinčić by following her on the streets and at her workplace on 19 June 2019, the police charged Mr. Marić with ‘endangering the security of a person who conducts activity of public interest in the sphere of information’ under article 138 par. 3 of the Criminal Code. 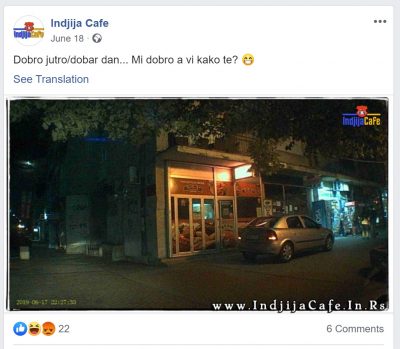 A screen grab of the Facebook post of an illegally parked car in Inđija with a caption “Good morning/good day. We are fine and how are you?” Fair use.

He is accused of assaulting and stalking the journalist after she published a photo of a car  illegally “parked in a disdainful manner on the sidewalk in front of a pastry shop” on the Facebook of her portal. Marić recognized the car as his and he started following and harassing the journalist. He first tried to throw water on the  journalist, and then followed her on her home street where he drove his motorcycle into her and swerved at the last moment. The journalist reported the incident to the police, but Marić continued to visit her workplace in the following days.

Marić seems to have connections to the local authorities in Inđija, which seem to tolerate his  aggressive actions. He is a member of the Night Wolves bikers club which had received grants from the municipality to support their activities, which may have included trips to Russia.

When the journalist tried to obtain footage of the assault from the municipal security cameras, she encountered a wall of silence. “Immediately after the attack I asked the municipality to provide the video footage of the incident, but they did not even dignify me with an answer, let alone to give me the tapes,” Ms. Marinčić stated for VOICE.

MP takes to Twitter to discredit journalist, her portal comes under hacker attack

Meanwhile, on 24 June, a Member of Parliament from the People’s Peasant Party Marijan Rističević used his Twitter account to discredit Ms Marinčić’s journalist status, claiming that she is just a “shopkeeper who for some unknown reason is presented as victim of persecution by some biker with immunity.”

In addition to her work at the local portal, the journalist had taken up a second job at a news kiosk to make ends meet.

In response to the MP, she posted archive footage of a TV show she hosted back on 11 September 2006 that featured Rističević as one of the guests. She  commented: “Rističević says I’m not a journalist but a shopkeeper. Here’s some footage from the shop.”

.@RSF_inter is calling the authorities of #srbija to protect journalist Verica Marincic @epicentarus of @IndjijaCafe as neither local politicians nor people in power should be above the law .The harassment of journalists has to stop! @anabrnabic @avucic #napadinanovinare #mediji

Starting from 26 June, the website of the portal Inđija Cafe has been under constant hacker attacks aimed at cracking its WordPress passwords and slowing the site down. The portal’s administrators took it offline out of precaution. Cyber forensic experts quoted by Cenzolovka.rs explained that the ‘brute force attack’ comes from many different addresses located in different countries around the world. At the moment of writing of this post the site www.indjijacafe.in.rs remains unavailable, while the media outlet’s Facebook page has not been updated since 23 July.

The motorcycle club Night Wolves, also referred to as “Putin’s Angels” in U.S. media, was founded in Russia in 1989 and currently has branches in 14 different countries. Over the years, they have performed various propaganda and paramilitary functions for the Kremlin while openly supporting Russian President Vladimir Putin. They were placed under US sanctions for their support to pro-Russian separatists in eastern Ukraine.

In its article, VOICE also uncovered data showing that the municipality of Inđija used taxpayers’ money to finance the activities of the local branch of the Night Wolves. In 2018, the club received over 9200 US dollars from the municipal budget, an increase from the 4200 dollars they received in 2017. 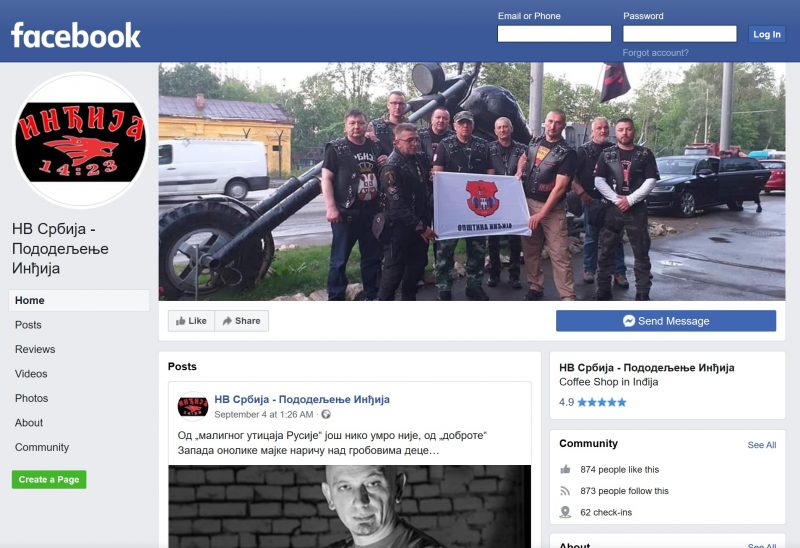 Screen grab of the Facebook page titled “Night Wolves Serbia – subsection Inđija”, featuring members of the Night Wolves motorcycle club in Moscow, including Nenad Marić holding a flag of the municipality. The top post has a caption “Nobody has died from the ‘malign Russian influence,’ while ‘the goodness’ of the West resulted in so many mothers crying over the graves of their children.” Fair use.

The official Facebook page of “Night Wolves – subsection Inđija”, contains cover photo showing the suspected assailant Nenad Marić posing with other members of the bike club while holding the flag of the local municipality of Inđija. The photo is captioned “Moscow 2019.” According to the other photographs and posts, the Night Wolves from Inđija also took part in a motorcycle show in Sevastopol (in Russian-occupied Crimea), during which Vladimir Putin delivered a speech.

‘Night Wolves’ as promoters of Kremlin influence in the Balkans

According to the the official website of ‘Night Wolves Serbia‘, a decade after the founding of the club in Russia in 1988, it opened branches in Belarus, Ukraine, Latvia, North Macedonia, Serbia, Bulgaria and Germany.

Undoubtedly our club has been founded upon rebellious premises, but always relying on Orthodox Christian roots and the history of its country. For us the motorbike is a [sic! capital letters] Symbol of our Freedom, our Logo is Symbol of Unforgiveness, Loyalty and Honor. We  are proud of our unstained past, and our Russian name. Our bike club is a club of Russian spirit, a club of patriots! A club capable of uniting the Russian, Slavic society with the power of true bikers’ brotherhood.

The presence of the Night Wolves in Serbia, Bosnia and Herzegovina and Montenegro has been connected with the promotion of Russian influence, Serbian nationalism, pro-Kremlin and anti-NATO activities, with backing of the Serbian political elite. They have been organizing various events such as visits to monasteries, and have also taken part in controversial military parade.

Some of their members from Serbia have been denied entry to Bosnia and Herzegovina under security grounds. Members of the local branch in Montenegro have been questioned by the police for acting as unlicensed bodyguards for Serbian Orthodox clergy visiting the country.

According to research by the reputable Balkan Investigative Research Network (BIRN) the Night Wolves have been receiving support from the government of Republika Srpska, one of the two constituent entities within Bosnia and Herzegovina, dominated by Serbian nationalist parties.

The Night Wolves’ branch in North Macedonia has been promoting Russian interests and Macedonian nationalism. They admitted participating in the protests leading to the assault on the Parliament on 28 April 2017, but denied taking part in the actual raid, which then included attempted murders of political opponents of Kremlin-supported then-ruling party VMRO-DPMNE.