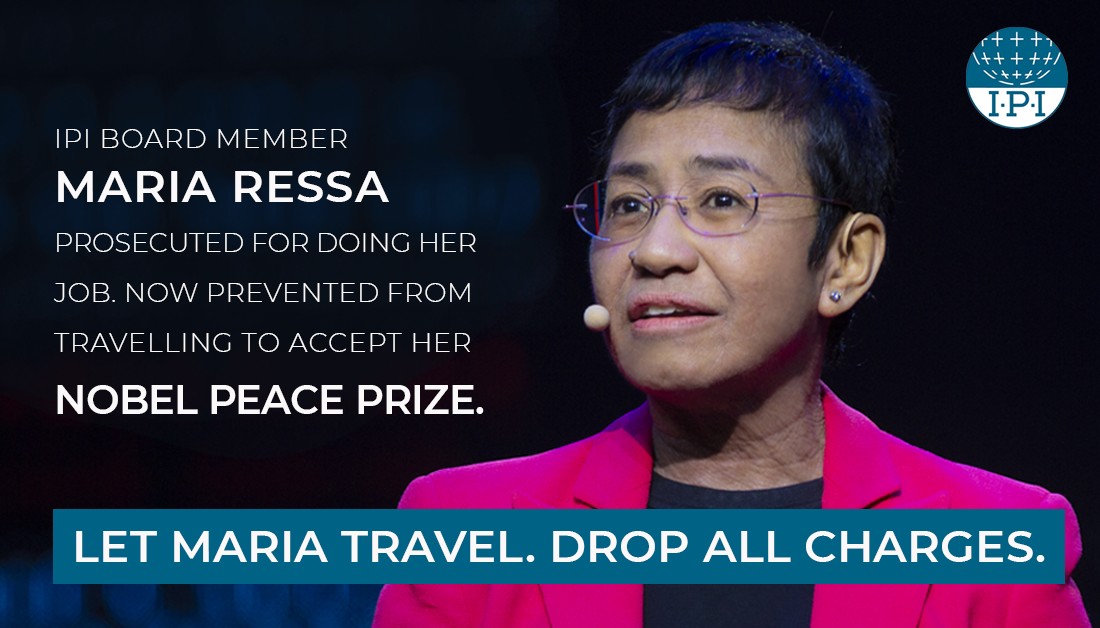 The Philippine government is seeking to prevent IPI Executive Board member and Nobel laureate Maria Ressa from travelling to Norway to accept her Nobel Peace Prize in person. In response, the Executive Board has published a statement today calling on the authorities to immediately lift any such restrictions as well as drop all open court cases against Ressa, who has been targeted by the state for her critical reporting.

“Maria Ressa is not a criminal, but an outstanding journalist who is globally respected for her courage to speak truth to power”, IPI Executive Director Barbara Trionfi said. “The trumped-up court cases against her – which are the basis for the travel restrictions – must be dropped. And she must be allowed to travel to Oslo. Blocking Maria from accepting her Nobel Peace Prize in person puts the Philippines in the company of some of history’s most repressive regimes. It is a shocking move that must be immediately lifted.”

Read the full statement by the Executive Board below.

We, the undersigned members of the global Executive Board of the International Press Institute (IPI) – editors and journalists hailing from 22 countries – call on the government of the Philippines to allow our fellow Board member and Nobel Peace Prize laureate Maria Ressa to attend her Nobel ceremony on December 10 in Oslo.

Equally, we renew our call on the Philippine authorities to drop all remaining charges against Ressa. We view these charges as targeted harassment intended as retaliation against Ressa and her news outlet, Rappler, for their critical reporting.

This year’s Nobel Prize was the first awarded to a working journalist since 1935, when the prize was given to Carl von Ossietzky. After this long drought, it is fitting that the prize was co-awarded to Ressa, who has set a global example in the fight to preserve press freedom as a pillar of open, democratic, and fair societies governed by the rule of law. She has shown outstanding courage in refusing to back down from her commitment to independent journalism, despite the tremendous pressure placed on her, including vicious online attacks and smear campaigns. Together with our esteemed colleague Dimitry Muratov, who has also been awarded this year’s Nobel Peace Prize, Maria Ressa is an extraordinarily worthy representative of the journalistic profession.

That is why we are deeply disturbed that the Philippine authorities are seeking to prevent Ressa from travelling to Oslo to collect her Nobel Peace Prize. The list of governments that have prevented Nobel Peace Prize laureates from attending the ceremony is short, but striking: the Germany Nazi party blocked Carl von Ossietzky from travelling to Oslo in 1935; authoritarian China did the same to dissident Liu Xiaobo in 2010. When her award was announced in 1991, Aung San Suu Kyi was held in house arrest by Myanmar’s military junta. We assume the Philippines does not wish to be mentioned in the same breath as these repressive regimes. It should therefore immediately reconsider its opposition to Ressa’s travel to Oslo.

We reject the argument brought by the Philippine government that Maria Ressa constitutes a “flight risk”. Despite the injustice of the charges levelled against her, she has shown respect for the judicial process, repeatedly returning to the Philippines from travels abroad. Indeed, since 2019, Ressa has been granted permission to travel 36 times. Each time, she has come back to the Philippines, even when facing new charges. She has underscored that “exile is not an option”. There is no legitimate reason to prevent her from accepting this award, which the Philippine government itself has said “is given to individuals who have conferred the greatest benefit on mankind”.

Crucially, it must not be forgotten that the travel ban against Maria Ressa is based on her June 2020 conviction on “cyber libel” charges that has left her facing up to six years in prison. In all, Ressa faces seven open proceedings, ranging from libel cases to alleged violations on tax and foreign-ownership law. But these cases themselves are an attack on press freedom, a manifestly transparent attempt to silence Ressa and shut down Rappler in retaliation for critical coverage of the current government. In other words: Maria Ressa is being prosecuted for doing her job. And she is now being prevented from accepting the Nobel Peace Prize on the basis of these spurious prosecutions.

The occasion of this year’s Nobel Peace Prize is a chance to honor the contribution that independent journalists make to our societies – serving as the watchdogs over the powerful, and ensuring that all citizens are empowered to fully participate in democratic life. They do so despite ever-increasing threats to press freedom worldwide. Maria Ressa represents the best in the journalistic community and must be allowed to accept this incredible honor in Oslo.

We therefore repeat our call on the Philippines to:

The entire IPI community stands firmly behind Maria Ressa. She has our respect and our full support as she continues to do her job amid the pressure she and her colleagues at Rappler face. We look forward to watching her and Dimitry Muratov accepting their well-deserved Nobel Peace Prize in Oslo on December 10.