Online Media in Serbia & Croatia: There is no Money, but there are Threats 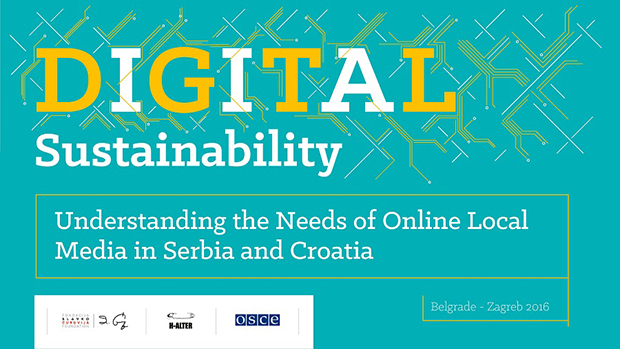 Lack of money and aid, coupled with threats to journalists, are among the biggest challenges to online media in Serbia and Croatia, as shown by the results of a research conducted in 60 newsrooms (39 in Serbia and 21 in Croatia) by the Slavko Curuvija Foundation in Belgrade and the Association for Independent Media Culture in Zagreb

Within the research “Understanding the Needs of Online Local Media in Serbia and Croatia”, more than a half of respondents in Serbia said that they are very dissatisfied with the manner in which public budgetary funds are allocated to the media. Funds from the state budget are the main source of income for as many as 36% of surveyed newsrooms.

Websites in Croatia are far less dependent on public money – only three out of 21 newsroom encompassed by the research have income from the state budget, while the others are focused on advertisers, it was said at the presentation of the research in Belgrade on 26 October 2016.

“The difference between the two countries is evident from the fact that the problems pointed out in Serbia are the lack of local advertisers and their financial weakness, as well as their lack of understanding of the importance of the online sphere, while the source of problems stressed in Croatia is inadequate financing by local community”, the research reads.

Although as many as a third of respondents in both countries state that they have no income from advertisers, the situation is somewhat better in Croatia where more than 20% of the surveyed media stated that they fully or almost fully gain income in this way. In Serbia, there is only 5% of such respondents.

Toni Gabric of the the Association for Independent Media Culture said that it is often the case that successful Croatian websites “manage to stay afloat owing to merging commerciality and journalism, not thinking about the criticality of such move; instead they engage more in doing business”.

“In less severe cases there are covert commercials by city-led projects or local factories placed as news items that are not labeled as advertisements. In more severe cases, it seems to me, there are more unscrupulous forms of covert advertising. Due to a fairly low level of journalism education, the owners of these websites do not differentiate between journalism and marketing business”, Gabric said.

A chance should be given to project-based financing, but only with the participation of committees deciding on the allocation of funds that would be more competent than the present ones, opined Violeta Jovanov Pestanac who launched the website Pančevo MOJkraj after she had lost her job with Radio Pancevo.

“If the general opinion and that of the committees would change, maybe everyone would understand the importance of supporting new media, particularly when we take into account the large number of people who were left jobless after the media privatization”, Jovanov Pestanac pointed out and added that journalists must educate themselves about digital media, social networks, as well as project writing.

Financial situation is somewhat worse for journalists in Serbia, as data shows that about a half of Serbian media operate on so-called “positive zero” [no debts, but no income either], 13% had losses in the last year and 36% had profit. In comparison, two thirds of the surveyed media in Croatia stated that they had a positive financial score in 2015.

However, a third of permanently employed in the two countries do not get their salaries regularly.

Regardless of the differences in doing business and the manner of media financing, journalists of both countries face threats and other forms of violence, as they said in almost 70% of the surveyed websites in Serbia and some 60% in Croatia.

“The largest number of the surveyed, both in Serbia and Croatia, stated that the threats came from representatives of local authorities, while journalists were physically assaulted in 14% of the surveyed media in Croatia and 10% in Serbia”, state the research results.

According to some editors, the media are faced with not so obvious, but very important pressures coming from inspection authorities. Namely, as an editor of a local website said, after the inspection visited them, they visited the website’s advertisers, as well.

“The inspection found no irregularities while visiting the website, but they used the opportunity to fine the advertisers and thus, as per the editor’s interpretation, sent the message that the advertisers should not be featured in this very critically oriented media outlet”, said Tamara Ognjanovic of the Slavko Curuvija Foundation, who worked on the research.

Jovanka Matic, PhD, of the Institute of Social Sciences in Belgrade, stressed that the research is very important because very little is known about the needs of local media in Serbia as Serbia is catching up with the world in the digital revolution, but at the same time it is undergoing a crisis of journalism and democracy.

In order to stop de-professionalization of media, Jovanka Matic thinks, it is necessary to find better funding models than the existing ones, and the best way is, as she said, that the audience pays for the media, which would ensure media independence.

“In order to preserve their mission, the media must remain non-profit. The best source of money for such media would be public funds, or the audience – via taxes introduced to providers – e.g. taxes on connections to new technologies. The state should participate in this by waving some taxes that the media currently pay. Therefore, one shouldn’t expect that the audience donates money, but that the influx of money to the media from the audience should be stimulated by deducting it from taxes”, Jovanka Matic said.

Such initiatives, Matic added, can be started only by media workers, and only by joint efforts can they define solutions and specific demands to be used to put pressure on decision makers.

The research “Understanding the Needs of Online Local Media in Serbia and Croatia” offers answers to questions as to the position of journalists working in local digital media, the conditions they work in and the problems and pressures from the local political and economic sphere they face.

The research results also show how public media policies in Serbia and Croatia and the general societal situation in both countries influence local problems, as well as to what extent the needs of local population for information are met.

The production of the research was supported by the OSCE Mission to Serbia and the National Endowment for Democracy (NED).

The article was originally published in Serbian by Slavko Curuvija Foundation. Translation by SEENPM.

← Center for Investigative Journalism of Serbia: Our Journalists are being Followed and Photographed
Rumunjski parlament ukinuo pretplatu za javni servis →