Getting Away with Murder

Incremental progress toward reducing the murders of journalists worldwide is fragile and could be thwarted by legal appeals and lack of political leadership, CPJ found in its latest report on impunity in retaliatory media killings.

CPJ’s annual Global Impunity Index, which spotlights countries where journalists are singled out for murder and their killers go free, showed little change from a year earlier. Somalia, Syria, Iraq, and South Sudan occupy the worst four spots on the list, in that order, as war and political instability perpetuate the cycle of violence and lawlessness.

But each year the index includes more stable countries where criminal and political groups, politicians, business leaders, and other powerful actors resort to violence to silence critical and investigative journalists. CPJ has found that corruption, weak institutions, and lack of political will to pursue robust investigations are all factors behind impunity in these countries, which include Pakistan, Mexico, and the Philippines.

In Pakistan, a surprise legal development this year–while not directly affecting the 2020 Impunity Index–showed that even murder cases that were long thought to be resolved can be upended.

On April 2, the Sindh High Court overturned the murder convictions of four men accused in the 2002 killing of Wall Street Journal reporter Daniel Pearl. The decision found Ahmed Omar Saeed Sheikh, who had previously been sentenced to death, guilty only of kidnapping Pearl and reduced his sentence to seven years, which he has already served. The Pearl family and the Sindh provincial government appealed, and according to news reports, the four men remained imprisoned at the end of September.

As CPJ Executive Director Joel Simon wrote in the Columbia Journalism Review, freeing the men “would be a devastating setback for justice that would also send a dangerous message to Jihadi militants in Pakistan and around the world, who have systematically targeted journalists in the 18 years since Pearl was killed.”

Pakistan and the Philippines have been mainstays on the Global Impunity Index since its inception in 2008. The Philippines is the biggest mover in this year’s rankings, improving from the fifth worst country worldwide to the seventh worst.

The change reflects the fact that the November 2009 Ampatuan, Maguindanao, massacre of 58 people, including 30 journalists and two media workers, no longer falls into the 10-year time frame for calculating the index. (Read more about the index methodology).

Landmark convictions late last year led CPJ to adjust the status of the Ampatuan cases to “partial impunity” from “full impunity” previously – meaning that they would no longer have figured into the index calculation regardless of the time frame. On December 19, 2019, a regional court convicted the mastermind, his brother, and 26 accomplices, and issued prison sentences of up to 40 years. The Philippines has 11 unsolved murders in the current 10-year index period, compared with 41 for last year’s index.

However, the Ampatuan case took a full decade to try, and the chief defendants, namely convicted masterminds Andal Ampatuan Jr. and Zaldy Ampatuan, have appealed their convictions. In the Philippines’ labyrinthine and politicized legal system, their legal challenges could take several years to be tried and the possibility of their acquittal on appeal still looms large. Scores of suspects remain free, including Ampatuan clan members, leaving those who have pursued justice for the slain journalists exposed to possible reprisals. Meanwhile, the unaccountable killings continue apace, with at least two Filipino journalists murdered for their work so far in 2020.

In part because of the Philippines moving down the index, Mexico – the deadliest country for journalists in the Western hemisphere – moved to the sixth worst impunity ranking from seventh last year. The number of unsolved murders in Mexico is 26 for this 10-year period, compared with 30 unsolved murders for the previous index.

In the past year, Mexican authorities achieved convictions for some perpetrators in the murders of Miroslava Breach Velducea and Javier Valdez Cárdenas, a CPJ International Press Freedom Awardee. However, the masterminds of both crimes remain at large. Further clouding the outlook for achieving justice for those and other journalists, the federal special prosecutor’s office largely responsible for progress in the Breach and Valdez cases is less assertively taking on new cases since President Andrés Manuel López Obrador took office. So far in 2020, at least four journalists have been murdered in retaliation for their work in Mexico.

Globally, the number of journalists murdered in reprisal for their work was the lowest in 2019 that CPJ has recorded in any year since 1992. The reason is difficult to pinpoint, with self-censorship, the use of other tools to intimidate reporters, and the high profile nature of some recent cases potentially playing a role.

The number of murders in 2020 has already exceeded 2019, but is not on track for a major increase. A couple of additional legal developments, meanwhile, do not bode well for ending the cycle of violence and injustice.

SAID: CASE OF SLAVKO ĆURUVIJA IS VERY IMPORTANT FOR CPJ

– The reason we decided to do so is the case of Slavko Ćuruvija that our Impunity report mentions. As you know, this is a very important case for CPJ, says for Cenzolovka CPJ’s Europe and Central Asia program coordinator Gulnoza Said.

– We were concerned to see a setback in 2020 in the progress Serbia made in bringing all perpetrators to justice after a welcome step in the spring of 2019. We thought the justice in Ćuruvija’s case would pave way to justice in other murder cases of journalists, especially given Serbia’s unique experience (we discussed it in the past for Cenzolovka). We still hope to see full justice in Curuvija’s case. By translating the Impunity report into Serbian, we hope more people in Serbia will pay attention to this important case, says Gulnoza Said.

On September 7, the Belgrade Appeals Court announced that it had overturned the convictions of four former Serbian state security officers involved in the 1999 killing of journalist Slavko Ćuruvija. The case is expected to be retried, according to news reports. CPJ had previously upheld the investigation into Ćuruvija’s murder – led by a joint commission of journalists and government officials – as one model for combatting impunity because of its transparency, mixed investigative team, and willingness to pursue new leads.

And in Slovakia, a criminal court on September 3 acquitted a business tycoon suspected of masterminding the 2018 murders of investigative journalist Ján Kuciak and his fiancée. Kuciak’s family vowed to appeal, according to news reports. Kuciak was one of two journalists reporting on corruption in the European Union who were murdered in a six-month period; the other is Daphne Caruana Galizia in Malta, in whose 2017 case no one has been convicted.

During the 10-year index period ending August 31, 2020, 277 journalists were murdered for their work worldwide and in 83% of those cases no perpetrators have been successfully prosecuted. For last year’s index period, CPJ recorded complete impunity in 86% of cases. The rate of complete impunity has inched lower in recent years. In “The Road to Justice,” a 2014 examination of the causes of impunity in journalist murders and possible solutions, CPJ found that the killers went free in nine out of 10 cases between 2004 and 2013.

Illustrating the entrenched nature of impunity, the 12 countries on the index account for 80% of the global total of unsolved murders of journalists for the 10-year index period. All 12 have featured multiple times since CPJ first compiled the index in 2008, and seven have appeared every year.

Nigeria is the only country to come off the index this year. One murder in that country, from 2009, is not included in the decade now under scrutiny.

CPJ’s Global Impunity Index calculates the number of unsolved journalist murders as a percentage of each country’s population. For this index, CPJ examined journalist murders that occurred between September 1, 2010, and August 31, 2020, and remain unsolved. Only those nations with five or more unsolved cases are included on the index. CPJ defines murder as a deliberate killing of a specific journalist in retaliation for the victim’s work. This index does not include cases of journalists killed in combat or while on dangerous assignments, such as coverage of protests that turn violent. Cases are considered unsolved when no convictions have been obtained, even if suspects have been identified and are in custody. Cases in which some but not all suspects have been convicted are classified as partial impunity. Cases in which the suspected perpetrators were killed during apprehension are also categorized as partial impunity. The index only tallies murders that have been carried out with complete impunity. It does not include those where partial justice has been achieved. Population data from the World Bank’s 2019 World Development Indicators, viewed in September 2020, were used in calculating each country’s rating. 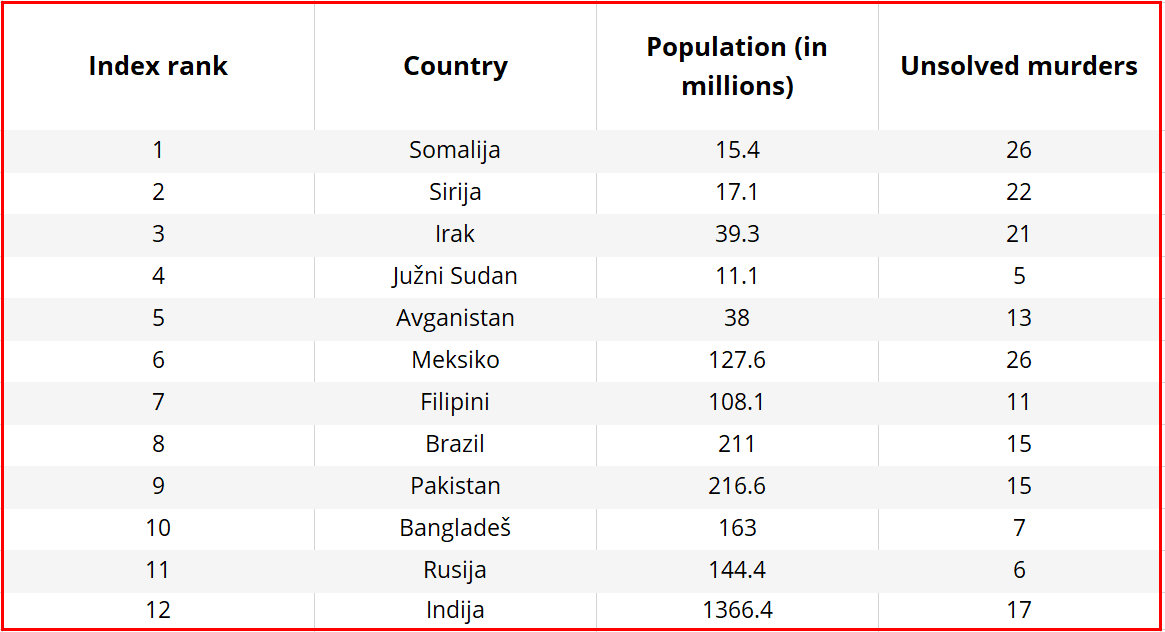