In addition to receiving perpetual online and direct threats sometimes coming from the representatives of the governing party and being physically attacked and smeared in the tabloid press, independent media in Serbia are now targeted in an entirely novel way: through registering their digital look-alikes.

Since about a year ago, some of the most trusted online media, Južne Vesti, Ozonpress, and Kolubarske, have been attacked by their ugly twins, entire websites which partly plagiarize the media. Currently, at least three websites have the same name, logo, description, and color scheme as the real independent outlets. They primarily publish the news communicated by the ruling party SNS of President Aleksandar Vucic with the likely objective to confuse the readers and advertisers, and thereby to undermine both the trust in the media and their revenues.

In at least two cases, they have served as a platform for horrible attacks on the female editors-in-chief by publishing reputation-damaging fake news stories and photo-montages.

For example, the Editor-in-Chief of Južne Vesti Gordana Bjeletic is the subject of at least three damaging articles, all of them prominently featured on the home page of the fake portal. Posts, all published this year, contain a slur name for editor-in-chief and cite “unnamed sources close to Bjeletic,” insinuating that reporting of actual Južne Vesti  is motivated by a desire to discredit the ruling party in exchange for an “excellent pay.” Two out of three posts are accompanied by photo-montages that suggest Bjeletic being close to political opposition leader Dragan Djilas.

The fake Kolubarske, has published at least nine articles directly attacking the Editor-in-Chief Darija Rankovic, of which six feature disrespectful photo montages.  The last damaging post is from 2019, however, all of them are still visible on the fake website. They call her” media vulture,” “so-called journalist,” and “unsatisfied as a woman,” and the stories run under headlines such as “Darija Rankovic, Valjevo-based Liar of the Year,” and “Darija Rankovic, Experienced Journalist or Experienced Manipulator?”.

The campaign against the biggest and most influential outlet Južne Vesti  which for years has suffered harassment  including endless tax examinations or death threats, now exceeds the virtual realm: the ugly twin has, according to the sources close to the original media outlet, applied for public funds without disclosing that they are not the real Južne Vesti.

Links to the ruling party

The owners of the websites didn’t even try to hide their identities. On the contrary, all three websites share the same phone number which they openly display. The investigation by Južne Vesti  confirmed by an investigative article published by Belgarde-based debunking website Raskrinkavanje and by an independent forensic study, revealed that two men behind fake websites are Zoran Majdak and  Marko Acimovic, with Acimovic being the actual owner of all three pretend websites through his company Info 24 Media, and Majdak being listed as a key person in the number of media outlets which Info 24 Media owns. 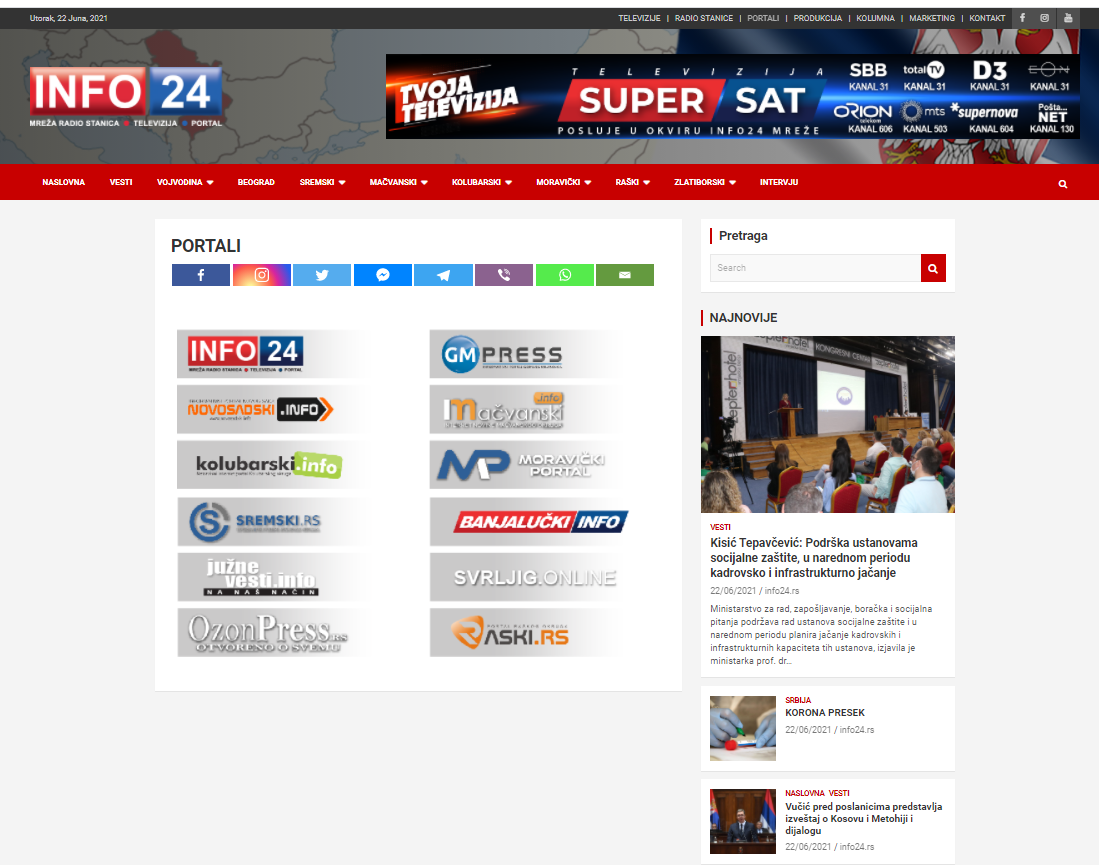 The website of Info 24 that lists all portals in their ownership including the fake “doubles”.

According to the database Kesformisanje that tracks public money awarded to media, media owned by Info 24 Media received an equivalent of 13 000 euros in 2018-19.

According to media reports from 2012, both men were arrested for being a part of a shady media business that involved running “text message scheme” and “false radio quizzes,” including operating a pirate radio station, through which some 32 million euros were stolen.

The fake OzonPress website recently published a statement signed by Zoran Majdak, in which he is declaring to be a member of the ruling party. In addition, in some cases, Majdak and Acimovic were buying media outlets for the media mogul supporting the ruling party Radoica Milosavljevic, according to an investigation by media website Cenzolovka. Another man who is closely connected to Acimovic and Majdak is Ivica Golubovic, the owner of TV Sat Communication, the agency that is a registrant of Juzne Vesti website.

Južne Vesti, the biggest among the three attacked media and with the biggest resources, have simultaneously initiated a couple of legal proceedings.

The media outlet filed a criminal complaint alleging that people behind the false website used a designation almost identical to that of Južne Vesti, including the logo and the name, while providing identical services to those offered by the original outlet, which is the offense normally sanctioned by the Serbian Criminal Code. However, in the eyes of the Basic Prosecutor’s Office, whose decision is confirmed by the final instance -the High Public Prosecutor’s Office in Belgrade, there is no intention of deceiving the public.

Given the fact that the ownership of the false Južne Vesti website is purposefully hidden through the services of Ascio, a company that ensures the anonymity of the true registrant, real Južne Vesti has officially complained to the hosting company in Serbia, citing plagiarism. They asked for the identity of the true owner to be revealed. The hosting company obliged, but it turned out that this information is not sufficient for the courts in Serbia.

When in a separate lawsuit, true Južne Vesti sued its ugly twin for a trademark infringement, the media requested from the court to impose an interim measure of stopping the unauthorized usage of the designation on the website, and its internet domain with an almost identical name (the difference being in .com vs. .info). However, the court was unable to do so because people behind the false website changed the name of the registrant in the domain registration- to a new company that was not part of the legislation, which is a practice that in theory may go forever.

In the last month or so, independent outlets from Kosovo and Macedonia also reported the appearance of the fake news portals mimicking the real ones. Given the fact that media trends, including attacks on journalists in the Balkan countries, often resemble each other, the method of running ugly twins- so far unchallenged – could quickly become the new way of targeting the independent press across the board.

The attacks are all the more worrisome that all three media are in their respective regions among only a few sources of independent journalism. As the attacks continue and authorities fail to react, journalists of Serbia’s independent outlets feel increasingly exposed, vulnerable and demoralized. They hope that alerting the international community about their predicaments will result in pressure on the relevant bodies in Serbia, so that they start protecting them.

Serbia is ranked 93rd in the World Press Freedom Index established by RSF in 2021.