Uruguay will be the next host of the World Press Freedom Day global conference. 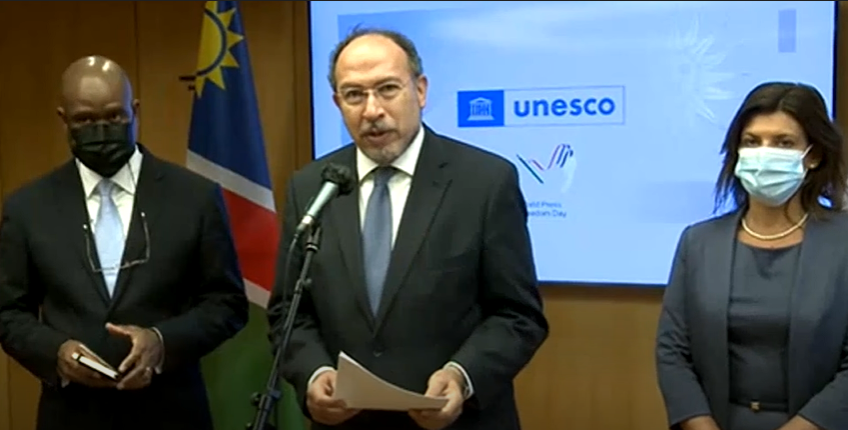 The announcement was made during a handover ceremony at UNESCO Headquarters in the presence of H.E. Mr Albertus Aochamub, Ambassador of Namibia, host country of the 2021 Conference; H.E. Ms Gabriela Civila Lopez, Ambassador of Uruguay; and Mr Tawfik Jelassi, Assistant Director-General for Communication and Information Sector of UNESCO.

“UNESCO is grateful for Uruguay’s longstanding commitment to press freedom, the safety of journalists and access to information, and we firmly believe that Uruguay will prove a valuable partner in the co-organization of this event.“ Tawfik Jelassi, UNESCO’s Assistant Director-General for Communication and Information

With Uruguay as the host of the 2022 World Press Freedom Day, the global conference returns to Latin America and the Caribbean after almost a decade since the event took place in San Jose, Costa Rica.

Civila Lopez, Ambassador of Uruguay to UNESCO congratulated Namibia for being the host of the latest edition of the conference and expressed that Uruguay assumed with pride and commitment the responsibility of co-organizing the 2022 global conference. Ms Lopez also reaffirmed Uruguay’s deep condemnation to crimes, attacks and all forms of violence and acts of intimidation against journalists and media workers.

The handover ceremony was also an opportunity to announce that the recognition of the Windhoek+30 Declaration, adopted by participants of the 2021 World Press Freedom Day Conference in Namibia, was proposed as an agenda item to the 41st session of UNESCO’s General conference (9-24 November 2021).

Ambassador Aochamub recalled the 1991 Windhoek seminar, which gave birth to the landmark Windhoek Declaration on Free, Independent and Pluralistic Press. He also referred to Namibia’s undergoing consultation process, supported by UNESCO, to draft a bill on access to information. “We are ensuring a credible, citizen-owned, grassroots-owned bill, which citizens feel their voices are being heard,” said Mr Aochamub.

“The Windhoek+30 Declaration is not a Namibian draft resolution, but something we are submitting on behalf of the rest of the world. It is our hope that we will have a sea wave of co-sponsors.“ Albertus Aochamub, Ambassador of Namibia to UNESCO

The Windhoek +30 Declaration takes forward the spirit of the original 1991 Windhoek Declaration on Free, Independent, and Pluralistic Press. It contains recommendations to address persistent and new challenges to press freedom, such as the severe economic crisis disrupting media and the increasing proliferation of online disinformation and hate speech.

The handover ceremony was attended virtually by other UNESCO Member States and delegates of previous host countries, as well as by the Chairs of UNESCO’s Executive Board’s regional groups.

World Press Freedom Day was proclaimed by the UN General Assembly in 1993 following a Recommendation adopted at the twenty-sixth session of UNESCO’s General Conference in 1991.